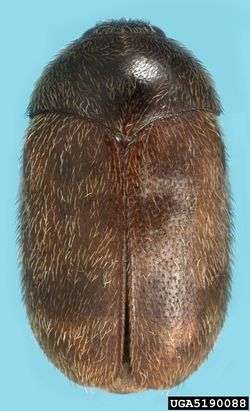 The beetle is a serious pest of stored grain and nuts, as well as other products like copra, stored soybean meal, seeds, furs, leather products and silk. The insect is widely distributed in warmer parts of Asia and Africa, as well as in some European countries. It was eradicated from the United States and Mexico by 1966. It can survive anywhere in storage environments. However, since the beetle is flightless and lives only 1-2 weeks, dispersal is limited.

The duration of the larval stages varies according to the temperature and may last between 1 and 6 months. If little food is available, the development may extend to more than a year. The larvae can go into diapause and survive temperatures below 0°C.

The adults are reddish-brown and about 2-3 mm long. They are characterized by elytra without a clearly defined pattern. Areas of lighter brown mix with areas of slightly darker brown, forming 2-3 poorly visible bands. The 5th sternite of the male has an apical patch of dense bristles.

For reviews see Athanassiou et al. (2019) and the respective page in BugwoodWiki.