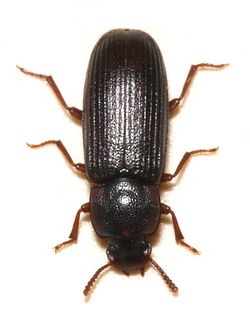 This genus contains more than 30 species of darkling beetles and about 10 of them are considered to be storage pests which infest grains and other stored agricultural products. Economically the most important species are Tribolium castaneum and Tribolium confusum. The former is also a common and easy to rear laboratory insect. Non-pest species are found under the bark of trees and in the nests of bees and ants, mainly in drier regions where they appear to feed mainly on fungi.

The genus and species and characterized, among others, by the structure of the elytra, antennae and pronotum.