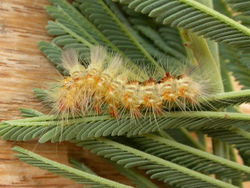 The moth damages apple trees and is native to Australia. It was first recorded from New Zealand in 1999 and was subsequently eradicated there. The campaign involved multiple aerial applications of Bacillus thuringiensis var. kurstaki over the city of Auckland, destruction of host plants as well as the release of sterile insects during the final stages. The campaign was concluded successfully about 10 years later.

Apart from apple, the caterpillars can also develop on other hosts like walnut, sycamore and different species of Acacia. The larvae disperse during the first instar by ballooning. The development of 5 (males) and 6 (females) larval stages lasts around 4-6 weeks. The females are wingless, but males can fly over several kilometers.

The caterpillars are brownish and hairy with 4 tufts of light hair on the first 4 abdominal segments. The female adult is dull brown, stays close to the pupation site and has a length of about 1 cm. The male has a wing span of about 2 cm and dark brown forewings with 2 light brown bands crossing them. The hind wings are yellowish with a broad dark brown to black band along the apical margin.