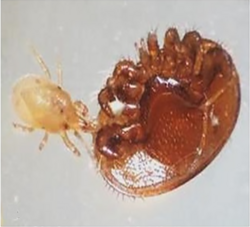 This mite is a polyphagous predator, living in the soil in warm areas of the northern hemisphere. It can can survive temperatures up to 32°C. The prey includes many soil organisms such as thrips nymphs, nematodes, phorid and sciarid fly larvae and several species of mites.

S. scimitus is commercially available in North America and Europe. It is used in greenhouses against sciarids and thrips and is being also explored as a biological control agent against the varroa mite in honey bee hives (Rondeau et al., 2018).

The species has been apparently misidentified frequently as Stratiolaelaps miles (= Hypoaspis miles).