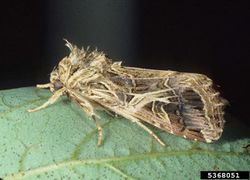 The species is an important polyphagous pest in Asia. The caterpillars feed on the leaves of many types of crops like cotton, tobacco, groundnuts, rice or soybean, often causing defoliation. Plants may be cut at the soil line. Yield losses can exceed 50% and in India, crop loss estimates (1996) exceeded US$ 100 million per year. In China it is regarded as the most common soybean pest.

Its native range includes Asia, Australia and the Pacific. It has been intercepted by quarantine many times in North America and has been found in a nursery in Florida in 2007. Eradication efforts were started immediately. Possible infestations can be monitored by pheromone traps.

Eggs are laid in clusters. The development from egg to adult can be completed within 3-4 weeks under favorable conditions. For pupation the caterpillar constructs a cell in the soil.

The adult is similar in appearance and biology to Spodoptera littoralis. However, the reniform spot on the forewing (click one image of mounted adult below) is outlined in white, followed by black, with the upper part consisting of a white-margined light brown area, somewhat like a letter "A".