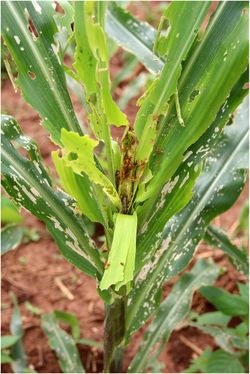 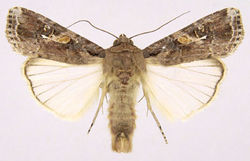 This moth is a serious pest of maize, turf and other crops in the American tropics and subtropics. Since 2016, it has been also reported from several countries in West Africa and has since spread to other parts of Africa. From Africa it has invaded countries in southern Asia and has quickly reached China (first record 2019). In 2020 it was first detected in Western Australia (Cook et al., 2021). The moths migrate to temperate regions during the spring and summer, but cannot survive long periods of cold temperature.

S. frugiperda can cause outbreaks, defoliation and significant crop losses. On maize yield losses of more than 30% have been reported. The larvae feed on the young leaves and whorls. They might destroy the growing point of the plant. The life cycle from egg, through 5-6 larval stages, to mature adult lasts around 2 months. Two morphologically identical forms can be separated based on their preference for either maize and sorghum (corn form) or rice and forage grasses (rice form).

For management, frequent insecticide applications are required for crops like maize, mainly due to wide-spread pesticide resistance. The availability of Bt maize has provided an effective alternative to pesticides, especially Cry1F maize can provide high levels of protection against this pest. In Brazil, almost 80% of the maize cultures have been planted with Bt maize during the 2012-2013 season.

The larvae have a variable colour, green to brownish, with black, lateral stripes and grow to a length of 3-4½ cm. The adults are greyish-brown with a wingspan of 3-4 cm. The forewing is dark brown and has an oval and oblique middle spot but otherwise lacks distinctive markings. The hindwings are whitish with a brown outer margin and brown veins (in contrast to some related species).