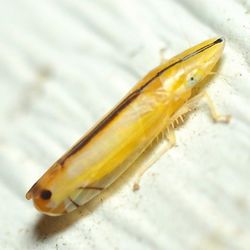 This leafhopper is native to Asia and was accidentally introduced into Hawaii in the late 1980s. It has been subsequently also recorded from other regions, including mainland North America, French Polynesia, as well as the Madeira and Canary Islands (off north-western Africa) since 2000. It attacks many host plants and causes interveinal chlorosis on the leaves.