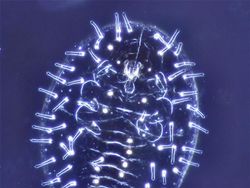 The whitefly is a pest of ornamental and fruit trees which is native to Europe, Africa and Asia. It has been recorded from North America since 1988.