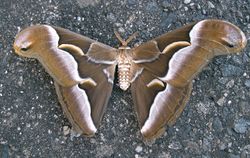 This family contains around 1500 species of large to very large moths. In some species the wingspan can reach 25 cm. They are found mainly in tropical and subtropical regions. Some are considered to be pests of crops or forest trees. For example, the range caterpillar, Hemileuca oliviae, can form aggregates on range land in North America which move and defoliate the grasses along the way.

The adults have large, often pectinate (with a projection), wings. There is often a large eye-spot near the center of the wings.