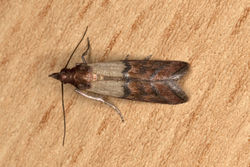 The moth is a widespread pest of stored foods, grains, nuts, dried fruits and seeds, including meal made from maize (Indianmeal). It can be found in kitchens, supermarkets or large-scale grain and food storage facilities as well as in flour mills. In contrast to some other storage pests, the caterpillars feed on the surface of the food products and do not bore into grains or nuts. Infestations can be recognized by the silken webbing on the food which is mixed with fecal pellets.

The development from egg, through 5-7 larval stages, to mature adult lasts around 1½ to 2 months. There can be continuous breeding at warm temperature. In temperate regions, the last larval stage can enter a diapause of several months at temperatures below 15° C. Depending on the environment, there are 2-8 generations per year. For pupation, the larvae usually construct a silken cocoon. The adults only disperse over short distances and have an irregular and fluttering flight.

P. interpunctella is difficult to control because adults or pupae can hide in remote corners. In case of infestations, fumigation (e.g. using phosphine in commercial stores) or the use of controlled atmosphere are the standard control methods. Resistance to phosphine and other pesticides has been reported. In the household environment, strict sanitation (careful removal of infested products) and the use of egg parasites has been recommended. In larger stores, pheromone traps are used for monitoring infestations. Regular cleaning is necessary.

The adult is 8-10 mm long, with a dark gray body. The wingspan is 15-20 mm and the forewings are light gray in the basal half but dark reddish-brown with black bands in the apical half.