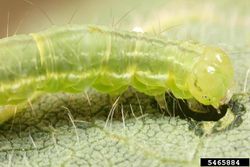 This moth is common and widely distributed in North America, where it can be a defoliator of soybean and other legumes. However, significant damage might not translate into large yield losses in soybean. The economic threshold is usually given at around 30% defoliation before flowering and 20% after flowering.

In spring, adults emerge from overwintering pupae and females lay eggs after mating. the larvae feed for around 1 month and then drop to the ground and pupate in the soil or in leaf litter. There are typically 2 generations per year. The caterpillars are light green with whitish stripes along the sides. The adult moth is dark brown with lighter areas on the wings.