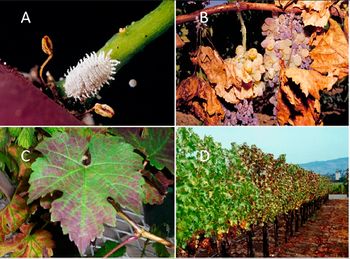 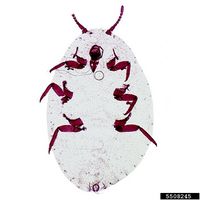 The mealybug is an important pest of grapevine in warmer parts of Europe, North America and other regions. It can also infest other crops. It was accidentally introduced into several regions (e.g. first recorded from California in 1994). All parts of the grapevine, including leaves, fruits, trunk and roots, are attacked. However, it is polyphagous and various other plants are also infested. High numbers cause sooty mold (due to honeydew excretion), loss of plant vigor and premature leaf drop. In addition, the mealybug is a vector of several grapevine leafroll-associated viruses.

It disperses by wind in the crawler stage and through infested plants. Control is done mainly by mineral oils. In nurseries, hot water treatment is used for disinfestation. The development from egg, through crawler, 3 (female) or 4 (male) nymphal stages to mature adult lasts around 1-1½ months. It overwinters under the bark and in pruning wounds. The mature female is 3-4 mm long, pink to grey and covered with wax.