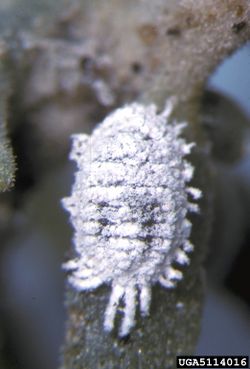 The mealybug is wide-spread and polyphagous in tropical and subtropical regions. It appears to be native to North America and has spread to various other regions, and became a quarantine pest in several countries. E.g. it has spread to southern China around 2005.

Various parts of the plant are infested (leaves, stems, roots), resulting in chlorosis and deformation. Outbreaks on cotton in Asia have caused significant damage like fewer, smaller bolls and yield reduction of up to 50% (Kumar et al., 2014). The life cycle from egg through crawler, 3 (females) and 4 (males) nymphal stages, to mature adult lasts around 3 weeks under favorable conditions.

The female adult is up to 5 mm long, dark green with red legs and covered with wax. There are two areas with little wax which show a pair of dark dorsal spots. It has many lateral wax filaments and short caudal filaments, about one-quarter as long as the body.