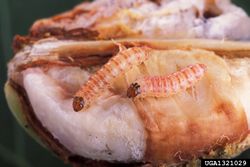 The moth is a serious pest of cotton with a world-wide distribution. In the southwestern U.S.A., yield losses have been projected at more than 50% if no control measures would be taken. Occasionally other crops like okra are attacked. The moth is native to subtropical semi-arid regions of Asia (India/Pakistan) and has been recorded from North America since 1917 and from Australia since 1911. The moth lays eggs on the flowers (1st generation) and the cotton bolls. The larvae feed on the flowers and bore into the bolls, including the developing seeds. Attacked bolls are aborted.

The development time from egg, through 4 larval stages, to mature adult last around 1 month. There are up to 5 generations per year. The larvae of the last generation overwinter in the bolls. The main management strategy is to destroy the infested bolls immediately after harvest. This is done by cultivating and irrigating the fields, or burning the plant residues. Resistant Bt crops have been also developed. In southwestern North America, an area-wide eradication program is under way, using the sterile insect technique.

The older caterpillars have pinkish to reddish stripes across the body. Adults have a wingspan of 12-20 mm. The forewings are about 7-10 mm long and grayish-brown with poorly defined dark spots and a fringed apical margin. The hindwings are grayish with long fringes on the margins. The labial palpi are long and curved with 2 black horizontal bands.