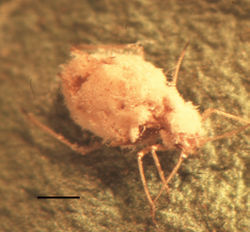 This fungus is widely distributed and infects a large variety of aphids. Some other species of Hemiptera have been also reported as host. It is often the most common pathogen of aphids, causing epizootics among pest species. P. neoaphidis forms rhizoids and the primary conidia are comparatively large and elongated, around 25-30 x 12-14 µm in size.