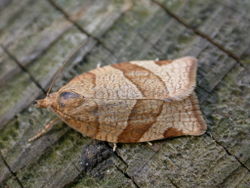 This genus is found in the northern hemisphere and in Africa. It includes around 60 species of leafroller moths. The adults have a wingspan of around 1½ to 2½ cm. The forewings are almost rectangular in outline, brownish with a darker base and an oblique cross band. The larvae are often green.

A number of species are regarded as pests of fruit trees. For example, Pandemis pyrusana is a pest of apple trees in North America.