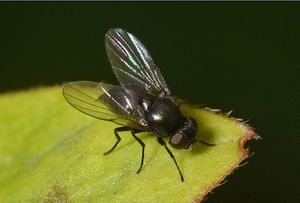 This genus contains around 200 species of flies and is widely distributed. Some species are exclusive leaf miners, but the majority are "external stem miners" and feed just under the epidermis of the stem and also pupate there. In the latter case, the young larvae live as leaf miners before they move to the stem.

The adults are usually black or dark grey. The taxonomic characters of the genus include a facial keel between the antennal grooves and the structure of the male genitalia.