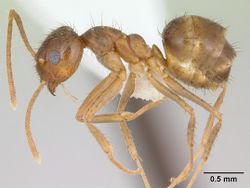 The ant is native to parts of South America. It has invaded new areas in South America as well as south-eastern and mid-southern North America. It is found in rural and urban areas and forms supercolonies where no aggression occurs between nests. The ant is omnivorous and reproduces fast. In the invasion areas, it often replaces native ant species and also protects sucking insects, promoting their pest status. In addition, damage to honey bee hives and injuries to livestock have been reported. However, it does not sting.

The development of alate stages is rare and spread of this species mainly occurs via human transport. Once established, a colony can split and the ant then spreads at a rate of several hundred metres per year. Nests are often polygynous containing up to 5 queens. Permanent nests are found in humid soil up to a depth of around 50 cm. In addition, transitory nests containing only larvae and workers are build near the surface and are moved frequently.