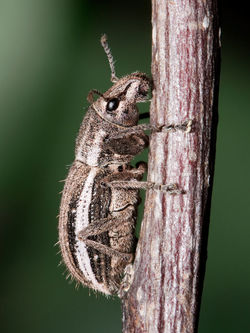 This is a large weevil genus with around 200 species which is native to South America. A number of species have spread to other regions and several of them are considered agricultural pests. For example, Naupactus leucoloma has been accidentally introduce into North America and Australia, where it attacks a variety of crops. Many species reproduce parthenogenetically, others are unable to fly. The adults are typically around 1 cm long and feed on the foliage of crops. The females lay unfertilized eggs at the base of the plants. The larval stage feeds on the roots and overwinters in the soil.