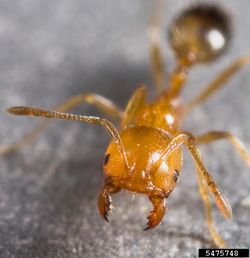 This genus of ants contains around 400 species, including several urbans pests like the pharaoh ant, Monomorium pharaonis, or the brownish-red flower ant, Monomorium floricola. Some also protect aphids on crops and can be transported on potted plants. The species are common in warmer regions. In temperate regions they live mainly indoors. Some pest species are invasive.

The species are often around 2 mm long or smaller. The workers of many species are "monomorphic" (of similar size) including the type species but polymorphic in others. The genus is characterized, among others, by the antennae which are 12 or 11-segmented with a 3-segmented club and by the morphology of the clypeus.