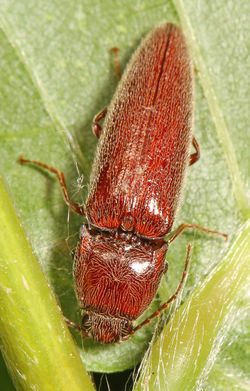 This genus of click beetles is widely distributed, mainly in the northern hemisphere. Some species are agricultural pests like Melanotus communis which damages sugarcane, maize and various other crops in North America.

The genus is mainly characterized by the morphology of the head and the thorax. The tarsal claws have rows of long teeth (pectinate). Melanotus is also a genus of fungi.