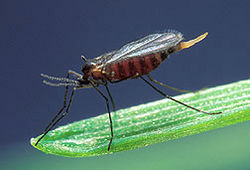 This gall midge is an important pest of wheat and other cereals in temperate and subtropical regions of Europe, North America, Australia and New Zealand. It also attacks related grasses if wheat is not available. It is native to Europe and is believed to have been introduced to North America (first record in 1779) with straw bedding used by Hessian troops during the American Revolution.

Eggs are laid on the leaf surface and the larvae enter and develop inside the stem. Although it does not make a true gall, it is able to manipulate the host plant to induce a nutritive tissue. The feeding results in stunting, reduced tillering, poorly developed grains and often breaking of the stem. The percentage of infested wheat plants can reach 50% in susceptible cultivars and cause substantial yield losses (e.g. see Smiley et al., 2004 or Buntin, 1999).

The larval development can be completed in about 3 weeks and a generation in 4 weeks. However, there is considerable variation in the development within the same generation. Some individuals pupate and emerge immediately while others delay their development and remain on the plant until fall to overwinter. There are usually 2-3 (sometimes up to 5) generations per year. In the autumn, mature larvae overwinter in their pupal cases in stubble, volunteer plants or winter wheat.

The adult is around 3-4 mm long, black to dark reddish brown. There is more red between the abdominal segments. With their long legs they resemble mosquitoes. The adult lives only for a few days and is rarely seen in the field.