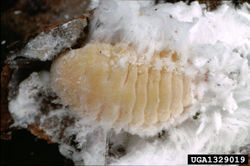 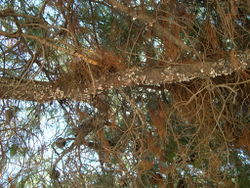 This scale-like insect infests the trunk and branches of pines and other conifers. It produces cotton-like wax which resembles snow in cracks of the bark. Heavy infestations may result in defoliation and eventual tree death.

The species is native to Greece and Turkey but has been also reported from two locations in southern Australia since late 2014. Quarantine efforts are under way to control it there. The insect produces large amounts of honeydew and in Greece, it is often considered beneficial by bee keepers because it results in large quantities of high quality honey (pine honey).