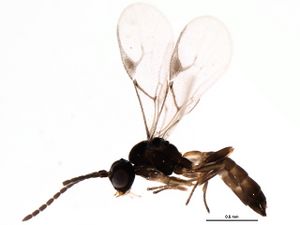 This wasp is a parasitoid of aphids, attacking a large variety of species. It is native to South and Central America and has been introduced into several countries, spreading subsequently. For example, it has been released in Europe in the 1970s, originally against species like Toxoptera aurantii and Aphis pests.

The parasitoid disperses readily. It is now widely distributed in southern Europe and neighbouring regions (northern Africa and western Asia). Further, it has become established in Australia and western Africa.