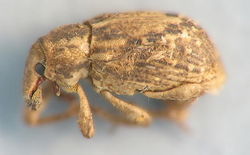 The weevil is native to North America, where it originally fed on wild rice and other aquatic grasses. It has become a serious pest of rice, starting around 1900. More recently, it was accidentally introduced into Asia (first record from Japan in 1976 and China in 1988) and into Europe (first record in Italy in 2004). It is now widespread in Asia and America.

The weevil is semiaquatic and well adapted to a life in water. The adults overwinter under litter on edges of rice fields or river banks. Eggs are laid in the leaf sheaths of rice plants, just below the water surface, around 2 weeks after the rice field is flooded. The young larvae mine the leaves and then attack the roots. The adults feed on the upper leaf surfaces producing longitudinal scars.

Infested rice plants are stunted with a reduced root system. Yield losses of up to 20% have been reported.

There are 4 larval stages which have a total development time of 3-4 weeks. The larvae are able to obtain oxygen from the rice roots and have specially adapted spiracles, shaped as hooks which pierce plant tissue. The pupal chambers are also attached to the rice roots, enabling them to obtain oxygen. The adult is about 4 mm long and brownish. Its middle legs are adapted for swimming.