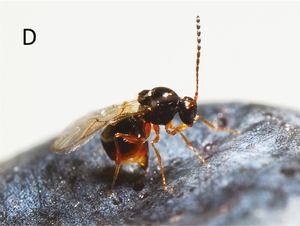 This wasp is found in eastern Asia, where it is a larval/pupal endoparasitoid of Drosophila species. Parasitization rates can reach 50%. It is of particular interest for the control of the invasive spotted wing drosophila (Drosophila suzukii) and has been studied as one of the more promising candidates for introductions into the invaded areas. Among the group of parasitoids attacking D. suzukii in East Asia, it has certain advantages. It is effective, fairly specific for Drosophila species, and the eggs hatch faster than in other species. The China, it often outcompetes other Drosophila parasitoids (e.g. see Giorgini et al., 2019). Several subspecies have been described for L. japonica.