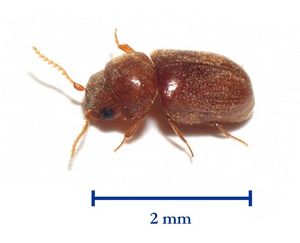 The beetle infests tobacco, oil seeds, dried fruits/nuts and various organic products in houses and stores. The damage is mainly done by the larvae. It has a world-wide distribution but is found outdoors mainly in warmer regions.

The cigarette beetle is very small, about 2-3 mm long with a reddish brown colour. The body is rounded, oval shaped, and the head is usually hidden under the large pronotum. Cigarette beetles have fine hairs on the elytra. They are very similar to the drugstore beetles but can be distinguished by:

Cigarette beetles often pull their legs to the body, tuck their head and lay motionless when disturbed. Cracks, nooks, and dark crevices are the common places where these beetles can be found. In bright open areas they are very active, flying readily to find a refuge. Most often cigarette beetles can be seen flying at dusk.