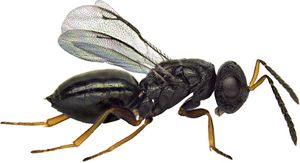 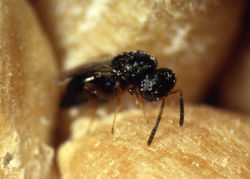 The wasp is a generalist solitary, idiobiont ectoparasite of late larvae and pupae of beetle pests which are found in grain and other stores. It is, for example, effective in grain stores against weevils of the genus Sitophilus and can achieve suppression rates of up to 95%. In houses, a common host is the drugstore beetle, Stegobium paniceum.

The wasp is produced commercially and is distributed by a number of companies. For a grain store, 2-3 inundative releases are recommended per year with release points close to the target hosts.