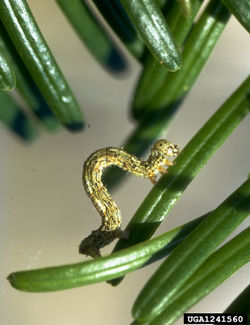 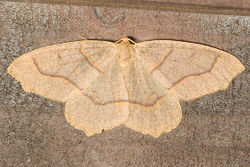 This looper is native to western North America, but has spread to eastern parts, where it can cause serious outbreaks on hemlock, spruce and fir trees. Between 1989 and 1993 over 200,000 ha of forest were defoliated in Maine and an outbreak in eastern Canada in 2000, covered 1 million hectares of conifer forests. The early instar caterpillars mainly feed on the young needles, late-instars on last years needles. The feeding results in rapid needle loss and can kill a tree within 2 years. L. fiscellaria is regarded as a quarantine risk to European countries (Marinova-Todorova et al., 2020).

The wings of the moths are light brown, crossed by two dark-brown wavy lines. The wingspan is around 35-40 mm. The caterpillars are greyish with a pattern of black lines and marks.