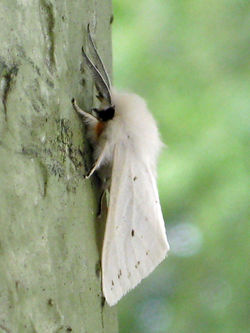 The moth is native to North America and was introduced into Europe (first record 1949) and some temperate parts of Asia (first record in Japan 1945). It is highly polyphagous and an important pest of fruit, nut and ornamental trees in some regions. The young larvae scrape the leaf surface, while older caterpillars can cause defoliation.

The larvae are gregarious and construct extensive webbings, sometimes covering several branches. They have long hairs and a variable colour. Young larvae often have a light colour with black spots while older larvae tend to be darker with lighter lateral stripes.

The adult has a wingspan of 30-40 mm and is mostly white. It might have brown or black spots on the forewings. The development through 7-11 larval stages lasts several months. There is 1 generation per year in temperate regions and up to 4 in warmer areas. It overwinters in the pupal stage.