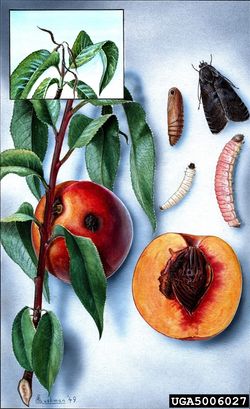 This moth is a serious pest of stone and pome fruits with a nearly world-wide distribution. The origin is believed to be the northern parts of eastern Asia, where it might have evolved with the peach tree.

The larvae feed on the shoots, causing twig die-back and enter the developing fruits. Infestations often result in serious economic damage. A single larva can destroy several shoots. Fruits infested by larvae might appear normal from the outside and the damage is only visible once they are cut open. The main fruits attacked are peach, apple, pear, quince, apricot and plum.

The adults have a wingspan of about 1-1½ cm and are grey or brownish in colour. The mature larva is slightly more than 1 cm long and drops to the ground, via a silken thread, for pupation. The pupae of the last generation overwinter. There are 4-5 larval instars and up to six generations in one year in warmer regions. Control strategies include the use of pesticides and/or mating disruption through pheromones.