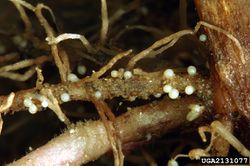 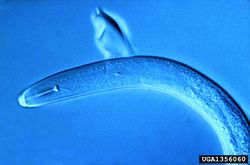 The species is a destructive cyst nematode found in many potato growing regions. Although potato is the main host, it can also infect some related crops like tomatoes or eggplants. Like the golden potato cyst nematode, the pale potato cyst nematode is native to South America and has invaded a number of different countries.

This species is closely related to Globodera rostochiensis and causes similar damage and symptoms. Also the same quarantine restrictions and control strategies apply to this species. The main difference is that females of Globodera pallida remain creamy white throughout their maturation stage until they die and become brown cysts.

Several morphological characteristics to distinguish both potato cyst nematodes have been described. However, due to the variability of their morphology and overlap of the characters, PCR and DNA sequence comparison is the most reliable identification tool.

G. pallida has been found in several parts of Europe, Asia (India and Pakistan), Africa (South Africa and northern Africa), South and Central America, and North America (Newfoundland and Idaho).

Like in other cyst nematodes, mature females are transformed into a durable cyst, filled with eggs. During the coming season, young juveniles leave the eggs as 2nd instars (J2) and then infect new plants by penetrating the roots. They stimulate the plant to form a special feeding structure, called a syncytium. Mature males leave the roots in search of females. Females continue their development after mating, forming cysts. In temperate regions there is one generation per year.