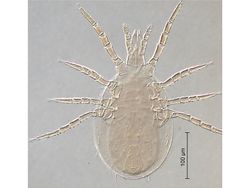 This genus of predatory mites contains several important predators of pest mites and some are produced commercially. The most important species is Galendromus occidentalis which is used in greenhouses and field crops against spider mites. The genus is mainly characterized by the number and arrangement of dorsal setae as well as other morphological features like the pores in the dorsal scutum.