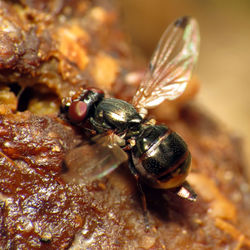 This genus contains around 100 species of picture-winged flies mainly found in America but some species have a wider distribution. It includes several pests which attack for example sweet corn.

On maize, the 1st instar larvae feed on the corn silk, disrupting pollination. Later the larvae enter the cobs, making them unmarketable. A corn ear may be infested by hundreds of larvae and a whole truckload of cobs may be rejected because of kernel injuries. The mature larvae leave the cobs and usually pupate in the ground.

Other crops like sugarcane, sorghum or tomatoes may also be attacked. Currently, frequent insecticide applications is the main control method.