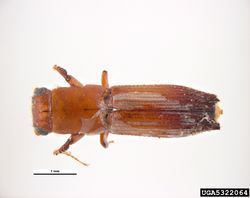 This ambrosia beetle is native to Central and South America but has been accidentally introduced into various other tropical regions. It was found in Africa in the late 1800s and is now widely distributed there. It then invaded parts of southern Asia and Australia, having been most recently (2016) recorded for the first time from southern China (Li et al., 2018). It can spread via wood products.

E. parallelus is highly polyphagous, attacking the trunks of various trees, including crops like rubber and fruit trees. However, mainly trees stressed by drought or diseases are infested. It is also suspected of being able to transmit plant diseases.