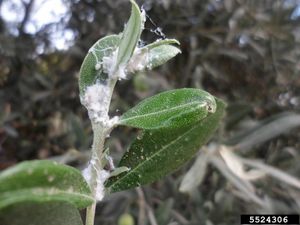 infestation of Euphyllura olivina on olive (click on image to enlarge it)
Source: IPM Images

This psyllid is native to the Mediterranean region, but has been reported from California since 2007. It attacks the young shoots, inflorescences and leaves of olive trees. The most conspicuous signs are the white wax filaments produced by the nymphs. Populations usually peak in spring, when olive trees are flowering. In the Mediterranean region, the damage can result in up to 60% yield losses.

During the first 10 years after it became established in California, the psyllid did not reached the main olive production areas and it was therefore decided to explore the option of classical biological control, rather than a phytosanitary strategy. This approach led to investigations on the suitability of Psyllaephagus euphyllurae, the most common parasitoid in the Mediterranean region (Hougardy et al., 2020).