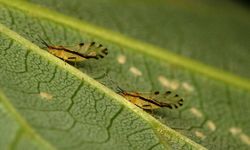 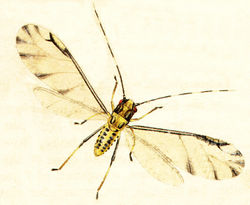 The aphid is a paleartic species, which has spread to the nearctic region and to New Zealand. It is considered a pest of lime trees (linden) in several countries, although in many cases the damage is minor. High aphid populations can cause deformed leaves, the appearance of honeydew and sooty mould, as well as the tree dropping the damaged leaves. Excessive honeydew can become a problem for cars parked under linden trees.

The linden aphid is 2-3 mm long, greenish yellow and can be recognized by the the black stripe and black marks on the forewing.