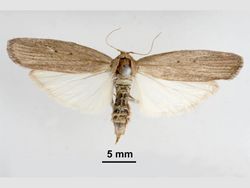 The stalk borer is a serious pest of sugarcane in Africa. It can also attack cereals like maize. Annual direct and indirect losses on sugarcane in South Africa alone have been estimated at around US$ 90 million in 2014.

Early harvesting and reduced nitrogen input can decrease the damage, but both measures also reduce the sugarcane yield. In addition, insecticide treatment has been shown to be useful for reducing the populations under some conditions.

The larvae are brown and develop over a period of 1 to 3 months. The adults have a wingspan of around 30-40 mm. The forewings are brown with 2 small dark spots near the middle. The hindwings are whitish.