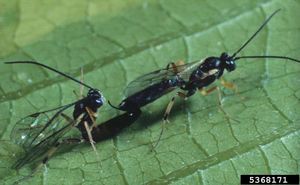 This genus of parasitoid wasps contains around 200 species and has a wide distribution. The adults are less than 10 mm long and mostly black. The host insects are lepidopteran larvae.

Some species are specialized on one family whereas others have a wide host range. Important biological control agents of pests are for example Diadegma semiclausum or Diadegma insulare. D. semiclausum has been released into a number of countries against the diamondback moth, Plutella xylostella. In fact six of the species listed below parasitize P. xylostella.