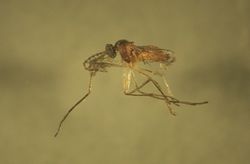 The gall midge is a native pest in North America. It has been introduced into Europe (first record 1996) and eastern Asia (first record 2008). The larvae feed on the shoots of blueberry and cranberry in North America. The damage disrupts the apical growth of the plants but often has little effect on yield. On the other hand, in South Korea damage has increased steadily since its introduction.

Populations on blueberry and cranberry are genetically distinct, produce different pheromones and do not interbreed. Like other gall midges, the mature larvae drop to the leaf litter, bury into the soil and enter diapause for overwintering. They pupate and start emerging as adults the following spring when shoots develop.