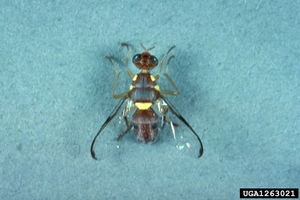 This genus of fruit flies contains around 300 species, however, the taxonomic assignment of various species is still in need of a revision.

The species are native in tropical and subtropical parts of Africa, Asia and the Australian/Pacific region. Introductions/interceptions have been reported from North America but the genus has not become established there.

Several species are regarded as agricultural pests that attack fruits of cucurbits and solanaceous crops.