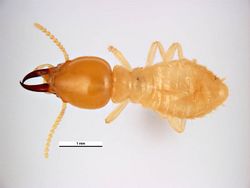 The termite is native to Asia, but has spread to the tropical and subtropical parts of America (first record in 1923). It has also invaded other regions and countries like Hawaii, the Marquesas Islands, Australia, Italy, Mauritius and the Reunion Islands. It is an important pest of wooden constructions in urban environments and also feeds on cardboard, paper and even attacks live trees.

The average colony size may include 1-2 million insects and a colony contains about 10-15% soldiers. They swarm throughout the year. Management normally includes baits and soil treatments.

The termite is similar to Coptotermes formosanus but the soldiers have only 1 pair of hairs on the fontanelle margin (see illustration below). Also, alates are darker brown and have clearly defined antennal spots. In addition, the tunnels of C. gestroi are narrower then those of C. formosanus and more highly branched.