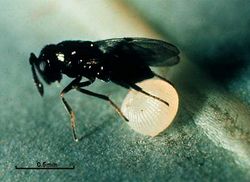 This wasp is an egg-larval, polyembryonic endoparasitoid of noctuid moths, mainly of Trichoplusia ni and related species. The wasp lays an egg into a Trichoplusia ni egg which will emerge inside the Trichoplusia caterpillar. The wasp embryo then divides in the host, creating up to 3000 additional embryos which develop into 2 types of larvae:
1) Reproductive larvae which develop normally, pupate and become adult wasps.
2) "Precocious larvae", also described as a nonreproductive helper caste or as soldier larvae. These defend the wasp brood against possible intruders, e.g. during superparasitism, and eventually die in the host.
The percentage of precocious larvae differs in fertilized wasp broods (those becoming females) as compared to unfertilized broods (becoming males). In some cases a female wasp lays 2 eggs into the host, a fertilized egg as well as an unfertilized egg. The precocious larvae can then also manipulate the sex ratio of the reproductive larvae. The development of the parasitoids last through the 5 instars of the host and the adult wasps emerge from the mature caterpillar.