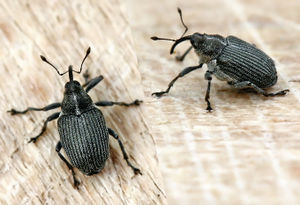 The weevil attacks the buds and the pods of rape/canola and colza. It can also cause serious damage for producers of seeds of cabbage and radish. On rape/canola losses of up to 70% and averages of 20-40% have been reported in North America. It is native to Europe and has been found in North America since 1931 (first record in British Columbia).

There is one generation per year and the development from egg to adult lasts around 2 months. The adults feed on the flower buds and the young seed pods. They lay eggs in the young pods, typically only 1 per pod, and the young larva feeds on the developing seeds inside the pod. The mature larva leaves the pod and pupates in the ground. The young adults emerge in autumn. After feeding, they migrate to overwintering sites (leaf litter and soil). In spring, the re-emerging adults might feed on cruciferous weeds before a new crop is planted.

For control in canola, it is recommended to plant a trap crop (e.g. an early flowering Brassica species) along the edges of the field which is then sprayed with insecticides. Crop rotation is another option.

This species has previously been known under the name Ceutorhynchus assimilis and that name is still found in some recent literature. The adult is black or dark grey, with a wide body and around 3 mm long. The proboscis is curved and shiny. The long legs and the elytra have whitish scales. When disturbed, adults fold their legs to the body, drop to the ground and remain motionless for a few seconds.