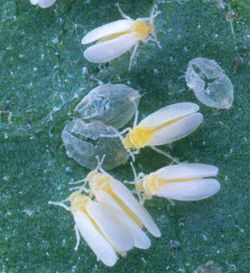 The biotype has been regarded by some authors as a separate species, Bemisia argentifolii. This name was established in 1993 and was in common use for about 10 years. The biotype is also called biotype B, but the name Middle East Asia Minor 1 (MEAM1) is now used by most authors. As the name suggests it is believed to have originated in the Near East and Western Asia. However, it has spread to other regions and now has a world-wide distribution. For example, it was introduced into North America around 1985 (Li et al., 2021).

It is highly polyphagous, infesting vegetables (e.g. Brassica spp., tomatoes, cucurbits and lettuce), ornamentals, cotton, alfalfa and other crops. Further, it is an important vector of plant diseases (e.g. tomato and cucurbit virus diseases). It is probably the most important of the Bemisia tabaci biotypes. This form is highly invasive and often more competitive than the other biotypes (e.g. see Smith et al., 2020).

For details on the biology of this species, see the species page for Bemisia tabaci.