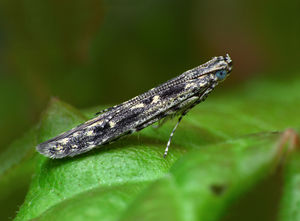 The family Batrachedridae includes more than 100 species of tiny moths. The wings and antennae are typically held close to the body.

The genus Batrachedra has a world-wide distribution. The larvae often feed on developing inflorescences, fruits, or conifer needles. Several species are regarded as pests like the lesser date moth, Batrachedra amydraula, a pest of date palms in the Near East.