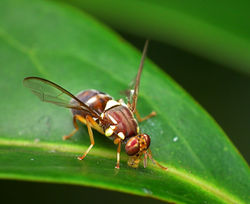 The fruit fly is common in eastern Australia, where it infests a wide range of tropical and temperate fruits like citrus, pome and stone fruits. Heavy infestations can result in complete crop losses. In addition, vegetables like tomato or green pepper may be attacked.

B. tryoni is also present in New Caledonia, French Polynesia and Pitcairn Islands. Outside these areas, several invasions of B. tryoni have been detected which, however, have been successfully eradicated (e.g. in Western Australia, mainland U.S.A. and the Easter Island).

As for many other fruit flies, mature larvae leave the fruit and pupate in the ground. The development from egg to adult ranges from 2 weeks to 2 months depending on the season. There are 4-5 generations per year. It overwinters in the adult stage.

Control involves the spraying of insecticide-treated baits on the vegetation surrounding the crops and/or insecticide treatments of the ground under the fruit trees to kill larvae and emerging adults. Pheromone traps are used for monitoring and for control. Infested fruits are placed in tied plastic bags and left in the sun for several days. Eradication campaigns rely on a combination of the above methods plus the release of sterile males.

The adult is 5-8 mm long with a wing-span of 10-12 mm, reddish brown with yellow marks. The wings have a brown band along the costal margin, ending at but not broadening at the wing tip. There is another band from the wing base to the hind margin.