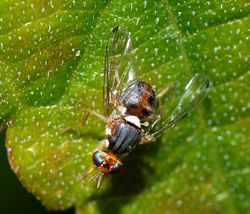 This fruit fly is a serious pest of olive fruits and cause premature fruit fall, decreased yield and/or reduced fruit and oil quality. The species is found in the Mediterranean region, western Asia and parts of Africa. Also, it has become established in western North America (California and parts of Mexico) and has been recorded there since 1998. It is suspected to have originated from sub-Saharan Africa where the wild olive Olea europaea cuspidata is found.

Yearly economic losses have been estimated at around 1 billion US$. Current control methods target the adult stage and are based on frequent sprays of baits mixed with spinosad insecticides. The development of biological control is ongoing and several exotic parasitoids have been released against the fruit fly. Some have become established.

Only one egg is laid into an olive fruit when it has reached a length of almost 1 cm. The larvae develop through 3 instars and the mature larvae leave the fruit and pupate in the ground. The life-cycle from egg to mature adult may be as short as 4 weeks in the summer, but is much longer in the cooler season. In one year, there are typically several generations, the main one coinciding with the presence of the most susceptible stage of the olive fruits. Overwintering takes place in the pupal stage.

The adults feed on nectar fruits and other organic matter. The females produce a pheromone to attract males. The males produce a different pheromone, used to attract females during the close-range phase of the courtship. The adults are 4-5 mm long, with the forewing having a small dark spot at the tip.