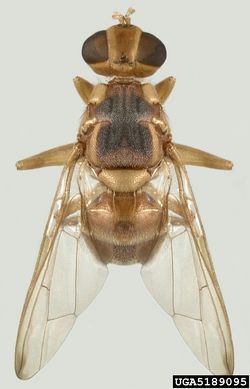 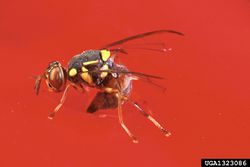 This species is a polyphagous fruit fly of tropical and subtropical regions which is believed to be native to different parts of Asia. It has been accidentally introduced into Hawaii (first record 1983), Japan (first record 1984), Kenya (first record 2007) and Tanzania (first record 2006). In Japan, the first infestation on Yonaguni Island was eradicated by 2011, but it also appeared about 500 km further north on Okinawa Island in 2010. B. latifrons is of quarantine concern in regions like the Americas and Europe.

The fruit fly breeds mainly in fruits from the families of Solanaceae and Cucurbitaceae. Plants from other families are also occasionally infested. The fruits of green pepper (Capsicum) and Solanum species like eggplants are most commonly damaged. The larvae complete their development in about a week, then drop from the fruit and enter the soil for pupation.