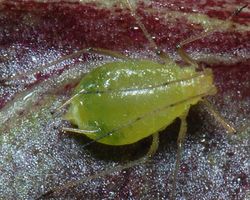 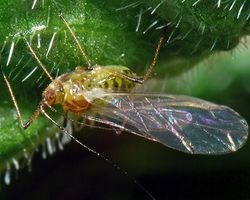 This aphid is widespread and polyphagous, attacking crops like potatoes, soybeans or vegetables. The feeding damage results in leaf chlorosis. In addition, it is also a vector of various plant viruses like the Potato leafroll virus (PLRV) or the Cucumber mosaic virus (CMV). Yield losses in soybean have been reported to reach 90% in Japan.